Speaking with Ruth Bader Ginsburg following our Swearing in Ceremony. What an honor to be welcomed by the second female Supreme Court Justice Mother’s Day weekend. RBG herself is a mother of 2 and Grandmother to 4.

It was the Monday after Mother’s Day 2018.  We were so honored to have Supreme Court Justice Ruth Bader Ginsburg speak with us after our Swearing in Ceremony at the Unites States Supreme Court.  We were told ahead of time that RBG was not feeling well and good not talk long.   She appeared and smiled graciously.  We asked her how she was feeling and she replied, “Not good.”
She then shared she was suffering from shingles but felt it was important to greet us that day.  What an honor! 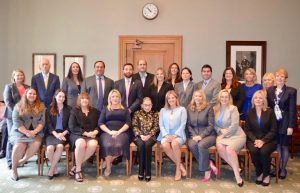